This was just posted in the Michigan Live Music Scene group on Facebook by Steve Allen. I will post more details in the comment section below as I get them. 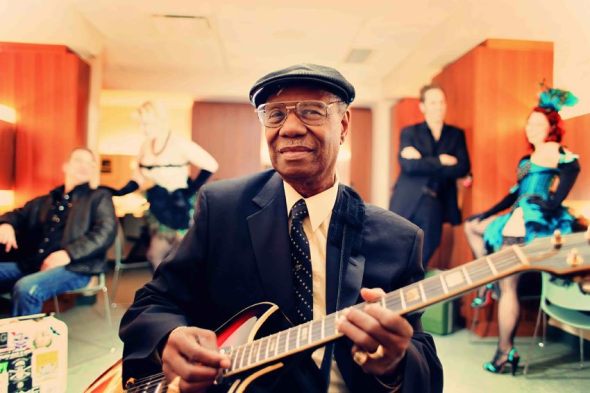 We have just received word that Detroit Blues great, Johnnie Bassett, passed away last night after a brief illness.
Yet another great Detroit Blues musician has left our earthly bounds far too soon.

Our condolences go out to those who morn his passing and please remember that we all should be rejoicing in the fact that we were able to share in his music.

Guitarist Johnnie Bassett was a special bluesman, possessing a certain inspired individuality and skill set rarely found these days. In a career dating back to the early 1950s, earned many accolades— just last year he copped Detroit Music Awards for “Outstanding Blues/R&B Instrumentalist” and “Outstanding Blues Artist/Group.” Well-regarded in the Great Lakes region and blues America, yes, but arguably even more admired in Europe, where he’s a favorite of festival-goers. Bassett’s familiarity with jazz, R&B and soul is just as considerable as his blues knowledge; he’s held his own in the fast company of luminaries from various strains of great American music including Ruth Brown, Big Joe Turner, Smokey Robinson, Tina Turner, Dinah Washington, former neighbor John Lee Hooker and a young guitar fledgling named Jimi Hendrix.

For all his talent, Bassett has made just a handful of feature albums. The best of the five is his new one, I Can Make That Happen (Sly Dog Records)—its release is cause for celebration. Bassett, even-tempered and polite, says, “My sound and the way I play and tune my guitar is different from anybody. I designed it that way when I was getting into the business. I heard all the other guitarists coming up and they all sounded the same to me— everybody wanted to be B.B. King or T-Bone Walker. I wanted to be different-sounding.” He realized his goal long ago through his open tuning, his impeccable timing, his personal way of bending notes, his mix of playfulness and relaxation in phrasing, and his arsenal of signature licks. Only a few of Bassett’s peers play from the heart as convincingly as he does on his trusty old Gibson, Heritage and Conrad guitars.

The Florida-born septuagenarian turns in fine performances on strong original material for I Can Make That Happen, supported by ace musicians belonging to two popular Detroit bands. Keyboardist Chris Codish, bassist James Simonson and drummer Skeeto Valdez are The Brothers Groove. The Motor City Horns consists of saxophonist Keith Kaminski, trombonist John Rutherford, and trumpeters Bob Jensen and Mark Byerly. (Each of these players also contributed to the success of Bassett’s 2009 Sly Dog release, The Gentleman Is Back.)

“The whole experience was electrifying,” says Bassett about recording the new album. “We rehearsed three days. I like what we got out of that.” Codish, who produced with Kaminski, recalls, “It was a lot of fun. All of us have been playing together for a long time and we were comfortable with each other. And I think we’ve grown as a band since the first record.” So, what’s it like to play with Bassett? “Johnnie’s the top of the groove pyramid,’ says Chris Codish, “where he sets the time with his playing, it’s very natural for the rest of the band to fall in beneath him to support and follow him. He makes it fun.”

Happily, Bassett and his friends show no interest in churning up the same old chord progressions on threadbare songs, as do hordes of blues recording artists year in and year out. Instead, the Motowners freshen up the blues using elements of jazz, R&B and soul on a program of superior songs mostly written by Chris Codish and his father, Bob. Bassett even refurbished rock and soul classics. The bandleader opines, “I think people will like the choices made as far as the material is concerned.”

Opener “Proud to Be From Detroit” is a funky blues born of a band studio-jam based on a bass riff. “We thought with all the problems in the city,” comments Bassett, “this song would make people forget about them.” Bassett’s singing of his own words about the city’s virtues has a slow-burning intensity; likewise, his guitar work is wonderfully expressive, a shining beacon of accumulated technique. Note the drama built by the mighty horns before Bassett sings. “You can dance to that all day,” he laughs.

“Love Lessons” has a more relaxed groove, spun off the piano rhythm; here, Bassett gives Bob Codish’s risqué lyrics a real-life shimmer. “I don’t know why we keep using Bob’s stuff,” jokes the bandleader, “but it all turns out well for us.” Ditto for “Spike Boy,” still another bawdy tune, this one packed with wicked train metaphors and enlivened by the jaunty confidence of the crackerjack band. “There’s a bit of a Henry Mancini-meets-the-blues feel to this one,” observes Chris Codish.

Bassett, as a singer and guitarist, has the capacity to sound fresh and involved emotionally at all times. But he seemingly outdoes himself with his excellent guitar solo on “I Can Make That Happen,” a number that began life as a short duet demo by Chris Codish and fellow songwriter Jim “Moose” Brown, a top Nashville sessions guitarist and co-writer of “It’s 5 O’Clock Somewhere.” Strikingly, Bassett translates emotions into bent phrases and tone with startling clarity and timing. Revitalizing soul great Solomon Burke’s “Cry to Me,” Bassett proves once again that integrity and entertainment aren’t mutually exclusive. “Solomon was one of my favorite balladeers,” Bassett replies when asked how they happened to cover the 1962 R&B chart hit.

On Bob Codish’s “Teach Me to Love,” Bassett joins “Detroit Diva” Thornetta Davis in resting their splendid vocals on what Chris calls a “warm background pillow of harmony” generated by the horns. Kaminski weighs in impressively with a tenor saxophone solo. Next up is the album’s sole instrumental, “Dawging Around,” penned by Kaminski in honor of Bassett’s Blues Insurgent Band saxophone player, the late Scott “E. Dawg” Petersen. The musicians’ comfort level with swinging jazz is obvious. Let’s hope Bassett, a veteran of many jazz organ combos, and always musically intelligent, records more instrumentals on the jazzy side of blues in the future.

The blues, of course, is about rising above difficulties, and “Cha’Mon!” and “Let’s Get Hammered” both emphasize the fun factor. Bob Codish’s “Motor City Blues” acknowledges the harder times of Detroit residency but it derives its emotional clout from Bassett singing witty lyrics that are optimistic about the future. Bassett and his producers unleash the biggest surprise near the album’s end with a stirring rendition of Jimi Hendrix’s “The Wind Cries Mary.” Bassett hosted a Sunday night jam session decades ago in Seattle where a young Hendrix regularly attended and performed, often picking up tips and licks from watching Bassett. The enterprising guitarist brings their connection full circle as he and his colleagues locate many new pockets of freshness in the familiar song.

Bassett, after all, isn’t just playing for the blues crowd. “My style of playing is laid back. I try to play my music where everybody of all ages can enjoy it,” he says with characteristic graciousness. “That’s what keeps you working, and I’ve been doing it since 1953. I hope the new album catches on.” Rest assured, Mr. Johnnie Bassett will make that happen.

Getting Ready to Vote in West Bloomfield Michigan »
« Marina owner buys all Macomb properties at auction for $4.7 million | The Detroit News | detroitnews.com